A’s and F’s in Jazz Schools

In America, people who get A’s are smart, disciplined, and will help to enlighten society. And people who get F’s are stupid, uncreative, and probably will have no effect on society. Right? 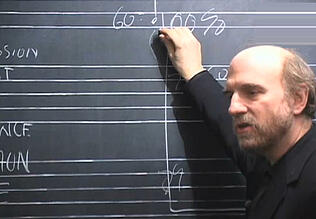 Two questions come to mind. First, what does an A or an F mean? Do they mean what most think or perhaps something else? Second, what is the cost of an A and the cost of an F?

Getting an A often means that someone has conformed or played the grade game, namely doing whatever is asked of them. These people know that in order to be looked as valuable in the work place, they have to be ranked high and grades are the most expedient way. But it is damaging to the A getters to think that an A is the ultimate statement of value, especially in a creative environment such as a jazz school.

Many of them have their creativity stunted by a system that rewards conforming and penalizes non-conforming. Now I don’t have trouble with grades, but I have great trouble at how those grades are determined because most grading comes from standardized testing methods.

I understand that standardized tests make it easy to determine who is valuable and who isn’t, but what is horribly missed are the people who don’t fit in with the tests and get an F. According to the current grading system these “failers” have nothing to offer. But all one has to do is to look at the history of accomplishment of “failers.”

Often these “failers” failed because there is no room for creativity in the current grading system. Standardized tests are created to standardize thoughts and expectation of behavior, not to nurture a progressive future.

The education system has got to be radically fixed to promote new ideas from individuals who don’t conform to past paradigms. Standardized tests are enemies of the future; they choke out creative inspiration, and any musician who has had their heads to the grinder to fit into a standardized system in order to "succeed" at the school knows what I'm talking about.

Now at very low level of information I can understand some standardization, but to communicate to a student that they are not valuable to society if they get an F is a missed opportunity and huge error in social planning and vision.