“One of the finest jazz singers working in this or any other city,” - The Chicago Tribune

“A wicked way with a lyric!” - The New York Times.

Spider Saloff has received critical acclaim nationally and internationally. Saloff is not only a seasoned vocalist but also a songwriter and playwright.  Her newest project is her one woman musical, “Entertaining Guests” which will debut in Chicago this year.

Heard world wide as the co-star and co-creator of the internationally syndicated Public Radio series Words and Music .

Recently, Saloff was featured with the prestigious Chicago Jazz Orchestra in a tribute to Ella Fitzgerald.  She received the honor of performing the American Premiere of a newly discovered song by the great Billy Strayhorn, “So This Is Love”. And as one of the rare officially sanctioned acts of the Gershwin Centennial, her concert, Spider Saloff Sings Gershwin, toured the U.S. and headlined the St. Petersburg Gershwin Festival in Russia.

Other leading venues include symphony orchestras and concert spaces such as; The Smithsonian Institution in Washington DC, Wilmington Grand Opera, Wallingford Symphony, The Castro Theater is San Francisco, and Town Hall and Dick Hyman’s Jazz in July in New York.

A five-time winner of the prestigious MAC Award, including one for Best Female Jazz Vocalist, presented by the Manhattan Association of Cabarets, she also received a special citation for her musical contributions from NARAS (presenter of the Grammy Awards).

Spider Saloff has 7 CDs released nationally on Kopaesthetics Records:  1938, Sextet, The Memory of All That, Cool Yule and A New Set of Standards, Like Glass..  Her Christmas CD entitled Cool Yule was a finalist for the Indie Awards.  Her newest recording, Cole Porter Live at Maxim’s was released summer of 2008 and nominated for a MAC Award as Jazz Recording of the Year.

“A thrilling singer!  This is a voice you can dig, ‘cause I dig it too.”  -Lionel Hampton

“Right-on intonation and a personal style which can sell a ballad or tantalize with half a chorus of scatting.”  -Dick Hyman

“Ms. Saloff is a gifted and polished song stylist.  A most enjoyable musical outing!”   -Rex Reed

“Here is a list of qualities that every great singer must have. Great pitch, Time, Clarity, (Diction) and the greatest gift of all instant identifiability - you hear a few notes and immediately know who is singing.  This is something that any singer would kill for.  Spider Saloff needn’t worry. She has all these qualities and then some! She’s incredibly musical, a great performer, and marvelous songwriter.  A perfect example of this is the title track from her latest CD “Like Glass” on Kopaesthetics. Just listen.  You’ll love it!” - Johnny Mandel 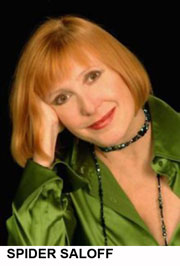